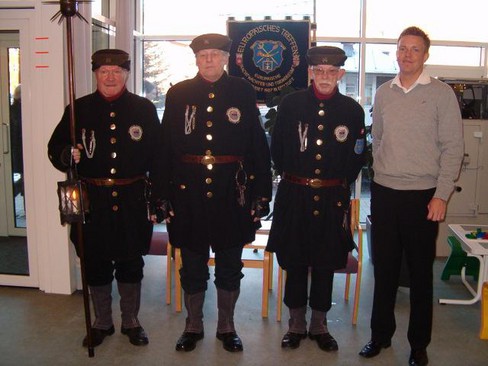 January 5th. Haderslev Kjøbstads Vægter Laug moved the stand to Arbejdernes Landsbank, Gravene 3, Haderslev where you, in one months time can see and admire the beautiful Stand in the window.

Watchman Guild store the Stand in Haderslev this year, preceding the emphasis Meet to be held in Ascension Day here in Haderslev attended by approx. 130 active Watchmen and their spouses. The watchman gathering held annually in one of the 54 cities which are members of the Night and Watchmen Guild of  Europe, formed in 1987 Ebeltoft.

Haderslev Kjøbstads Vægter Laug will this year include two new Watchmen in the guild.

Haderslev City is a member the Night and Watchmen Guild of  Europe, Watchmen Guild members can be admitted as individuals in the guild if they qualify for admission. The Watchmen Henning and Peter should actually have been included last year in Belecke, but chose to wait to be included here in Haderslev.

The Watchman Guild is preparing this years gathering 21 to 24. May 2009. Emphasis can be seen ind the city these days.